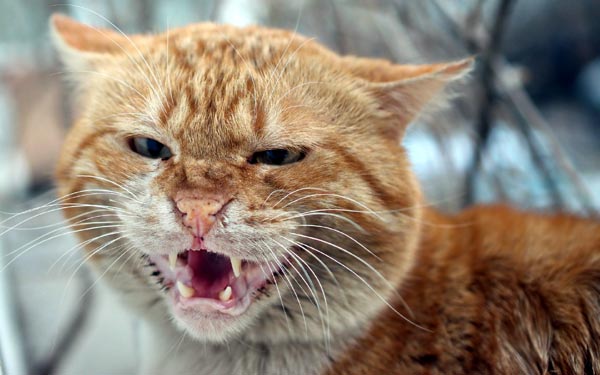 My cat Luna started hissing at a new cat during a 2-week boarding job. That isn’t normal for her since she was friendly with my previous cat. She sensed something I didn’t.

After a few days, I let the new cat out of my back room. That was a mistake, though not at first. On the third introduction, the male cat I was boarding viciously attacked my cat.

Even though I have experience with animals, I made a few big mistakes. I detail what I did wrong so that you can avoid my mistakes.

How to introduce a new cat to your cat

Dogs are easy to introduce to each other but cats are not. Do your research before attempting to introduce a new cat to your cat(s).

The quotes below are references to other articles on this subject. I reworded the tips and advice so that I did not have to provide a lot of sources.

Stop aggression between cats: Why do cats fight

Here is a summary of why the new cat I was boarding attacked my cat Luna:

“The change in routine or environment can stress a cat.” – & – “Be aware of warning signs.”

1. First off, the cat was stressed being in a new environment. It’s better to hire a pet sitter that comes to your place than to board your cat.

2. The cat was constantly moving its tail when I was in the back room with him. He also did not seem to like me petting him.

3. My cat was constantly hissing at the cat. She sensed something was wrong and I did not. The thing is though that she stopped hissing by the 3rd day. I supervised all 3 introductions, and the first two were event free.

“Most cat on cat aggression can be prevented by spaying \ neutering them while they are kittens.”

3.. I did not notice in the woman’s email that she mentioned her cat was a male who was not neutered. That was the first major mistake on my part.

4. The owner did not know if her cat was ever around other cats. I should have never introduced them, at least without some precautions (see below).

My mistakes: Missing the fact that the cat was not neutered, and having no history about the cats’ interactions with other cats.

* Don’t introduce a new cat to your cat if you have a similar situation.

How to stop aggression

There are some safeguards you can take. I should have prepared for the situation to turn bad.

1. You can use a cat carrier or a harness for the aggressive cat. The problem with my situation was that I thought it was my cat that would be the aggressor.

2. Use an electronic cat door that can only be opened by a collar on the “weaker” cat. I did not have this at my place, but it is a great idea.

“Controlling first impressions: letting the cats see each other and using pheromones.”

3. I kept the new cat in my back room that had to doors with glass panes for the cats to see each other. I should have trusted the instincts of my cat Luna

4. Using a pheromone diffuser to calm all the cats in the house by mimicking natural cat odor. I did not know about this product or else I would have used it.

Though my cat stopped hissing at the new cat, the new cat was still agitated. I missed the small warning signs and should have trusted my cat.

How to break up a catfight

“You can’t easily break up a catfight unless you wear protective body gear.”

1. Use loud sounds to scare the cats. Clap your hands, bang kitchen pots together, or try a whistle or air horn.

Some of that sounds ridiculous (air horn or pots) but the pictures of my injuries should make you embrace the ridiculous. I had a swelling on my arm the size of a small egg – within a minute of being either scratched or bitten. It happened so fast that I’m not sure if I was bitten.

“Try throwing a soft object like a pillow near the cats.”

2. That would not have worked for my situation. Both cats were under my couch and when Luna came out both cats moved too quickly.

“After a week, let the new cat roam your home.”

3. Oops! I only waited for 3 days. There is no way I will attempt another introduction. I feel like a prisoner in my own place.

During the 3 introductions, the new cat was moving through my place at a fast pace. I should have noticed that he was still anxious.

I got mauled by the new cat

This cat was going after my cat aggressively, not defensively. Maybe it was because she was hissing at him for the 3 days.

I followed the fight through my place trying to grab either cat, but I grabbed the wrong cat. He scratched and I think he also bit me. A lot of blood was coming out of the side of my forearm. Here are some photos.

I didn’t follow the rule “Don’t try and break up a catfight”. At least, don’t try it without full body armor. I’m lucky that the bite did not become infected.

In case your wondering how the situation turned out, here is what happened:

I had a lump on my forearm the size of an egg which was probably from the blood that swelled up beneath my skin.

Since the attack, I haven’t dare open the door to the backroom. I have to go through the basement, up into the yard and then through my back door to feed the nasty cat. That is why I feel like I’m a prisoner in my home.

Don’t make the same mistakes I made. And if your cat that is hissing at the new cat, then trust the cat you already know. Their senses are better than ours. Consider the following

1. Don’t bring a new cat into your home that isn’t fixed.

2. Take your time introducing the new cat to your cat(s).

3. Have someone to help you when you do make the introduction.

4. Take every precaution to make sure that all the kitties get along, and most importantly, don’t get injured.

I wish you luck and don’t get injured as I did!

In-Home Dog Sitting: Dog Sitters That Stay At Your Home

How Would I Find a Cat or Pet Sitter Near Me?

Boarding A Dog For The First Time