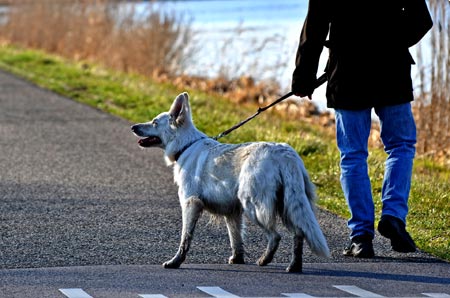 In the 10 years that I have been walking dogs, there have been sudden events that could have ended badly for the dog, myself or both of us. Luckily all went well, but it could have easily gone the other way.

Some of the things are common, and some rare, but they all involve two things: lack of attention to your surroundings and little time to react.

Here are the most common and most dangerous situations I’ve experienced and how you can avoid them. I hope you find my dog walking safety tips useful. 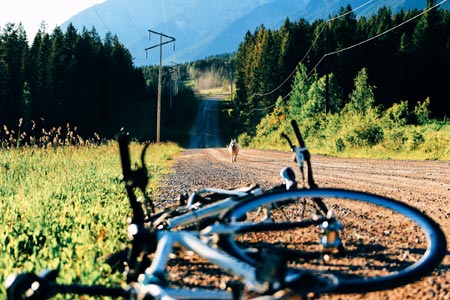 This is a rare one, but potentially deadly. And before any cyclists get up in arms, I walk, drive & bike to my visits so I’m not a bike-hater! Most bikers are responsible, it’s the selfish ones you have to watch.

There have been two times where someone riding a bike almost hit either myself or the dog I was walking. Both times were when I was crossing an intersection.

The first time was when I was walking a sweetheart of a Shetland Sheepdog named Stella. She was maybe 15-20 pounds. An I was crossing the street just shy of the sidewalk, a biker just missed hitter her. This one would have been hard to avoid because I assumed he would just go around me, but he cut in front of me instead.

The second time was with a big dog named Sampson who was probably close to 100 pounds. This one happened when I was in the middle of the intersection and this guy was moving so fast that I didn’t notice him until he just missed the dog. There were no cars so I crossed the intersection, but he came out of nowhere and did so silently.

Now a dog that big would have made the biker crash and get injured, but his speed would have transferred a lot of force for the dog as well.

Whether it is your dog, or you are walking someone’s dog, you have to pay attention and be aware of what is going on around you.

This is something that can also apply to bikers, but it’s really about not knowing what is right around the corner. The biggest concern though is an aggressive dog running right into a friendly dog, timid dog, or an innocent puppy.

It’s obvious that this one can turn out bad real fast. For me personally, I’m usually the one walking the aggressive dog since I seem to be the go-to guy for those types.

What I do is “go-wide” as opposed to hugging the wall of a building. I want to see what is around the corner before I turn. If I have to, I’ll go straight instead, or sometimes I’ll walk between cars until the other dog passes. I don’t want either dog to get hurt.

So once again, always pay attention, especially when rounding any kind of blind spot like a corner. 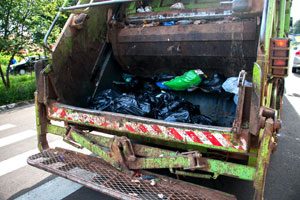 How do dogs find every scrap of food there is on the sidewalk? Their noses are amazing. I won’t even go into the gross things I’ve seen dogs eat. And of course, on trash day with all those bags filled with the scraps from last night’s dinner.

It’s like walking through an obstacle course. I was walking a dog one time when he ripped into a trash bag and came out with an entire chicken breast. He ate it within seconds.

What I would say here is, if you value your fingers, let them eat it. You can try to pull out some of the food but use your own judgment. But definitely let the owner know so that they can keep an eye out for any problems.

The main danger is if the food is wrapped in aluminum foil or plastic. You really have to do your best to steer clear of all the trash, especially because they will constantly try to pull you towards whatever goodies they smell.

It gets me every time though because you think they are just smelling like they always do. Trash day simply means extra vigilance or you risk a trip to the vet.

This applies to the section on turning corners, there can be problems with any dog no matter how you run into them.

For some reason, some dogs do not like my dog and they try to attack him. Each time the owner is shocked and they say things like “He’s never done that”.

I think it might be because I have a cat who loves my dog and follows him everywhere, rubbing up against him, sleeping with him, etc. The other dogs must smell the cat and they do what dogs do.

You never know so ask the owner if their dog is friendly, but proceed with caution. Try making sure that the leash is not slack so that you can pull your dog away if the situation turns bad.

Another concern may be the walker.

My dog is a super friendly American Staffordshire Terrier, the smaller of the pit bull breeds. I met a woman walking another Amstaff she was fostering. She told me that her dog wasn’t good with other dogs. So I walked away from her not noticing that she was ONLY standing in front of her dog and not having a tight leash.

The dog used the slack in the leash to run around her and sink his teeth into my dog’s shoulder. Oh boy! I’m freaking out and yelling, the woman is freaking out and screaming. I was punching the dog in the head. The woman was hitting him with her umbrella.

None of that had any effect. The dog only released his grip after I pushed my thumbs into his throat.

What’s the lesson here? Some people shouldn’t be walking dogs. She should not have had any slack in the leash knowing that the dog was a problem.

Here’s another event that happened so quick that I could not have stopped the attack. Now, I avoid other dogs if there is even a hint of a problem. By the way, the rescue that she worked for never paid for the vet bill! 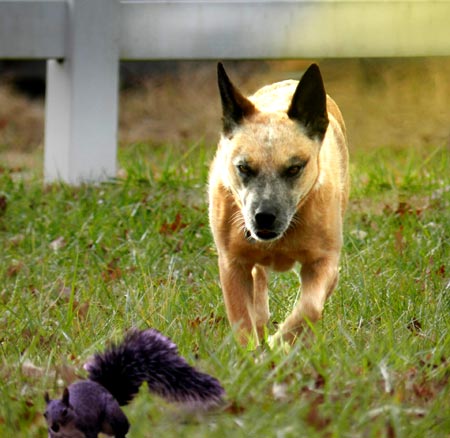 Squirrels! There are many reasons I do not like them. One of the main reasons is that I’ve almost had my arm ripped off by different dogs I was walking. Those retrievers just can’t help themselves.

Puppies will go after anything including wind-blown leaves and trash.

You also have stray cats or free-roaming cats, rabbits, possum, mice, etc. And of course stray dogs are the biggest concern, and I’ll cover them last. So here is what you can do if you walk a dog who loves “wildlife”.

The simplest thing you can do is to put your hand thru the loop and slip the leash webbing between your middle & index fingers. Your whole hand should also wrap around the leash as well. For more control, you can wrap the leash around your wrist a couple of times.

If you are using a retractable leash, the answer is simple – stop using it! They are the worst leashes for untrained dogs. What if the squirrel runs into the street and your dog runs after it as a car is coming? Just get a regular webbing type leash until you have your dog trained.

As for stray dogs, there is not much you can do if they attack your dog. A client of mine had her dog mauled by two pit bulls who escaped their owners’ yard. Her dog didn’t survive. I don’t know the details, but I’ll assume she didn’t see them coming. Or if she did, she didn’t have any time to do anything.

There was a time I was crossing the street with a car at the red light. The elderly woman in the car just continued to roll thru the red light. I yanked a 100 pound Siberian Husky out of the way and yelled: “What are you doing?” She looked at me and kept going slowly through the RED light. It was like she was in a daze.

Nowadays you’ll also have people looking at their phones as they go thru stop signs or lights. A general rule is, whether you are walking a dog or not, don’t assume every driver will see you.

I was walking a really sweet Boston Terrier Chihuahua mix named Super Funk. He was about the size of a football. Super was walking on my right when I passed a guy on my left who said: “You better keep your dog away from me or I’ll kick him!”.

I did not respond kindly. Now that’s someone who hates dogs. They are out there so make sure to keep your dog close to you.

And finally, the salt on sidewalks after it snows is obviously quite painful for all dogs. It’s the salt and water from the melting that is the problem. It’s best if you can stay on snowy sections or on the sunny side of the street where parts of the sidewalk are dry from the sun.

If I get a text or a phone call, I stop walking to reply or answer. I do not continue walking while I’m on the phone. I see other walkers who never stop looking at their phone, even while crossing the street.

I also wrote an article for people starting a dog walking business that you might want to read. It’s Part 4: Tips and Tricks and it has pointers for dog walkers that you may find interesting.

Feel free to contact me with any stories of your own or any dog walking safety tips that I missed and take care of those dogs!

19 Health Benefits Of Having A Dog In Your Life

Dog Walking After Halloween: Watch Out For This One Thing!

How Much Exercise Does A Dog Need Everyday?