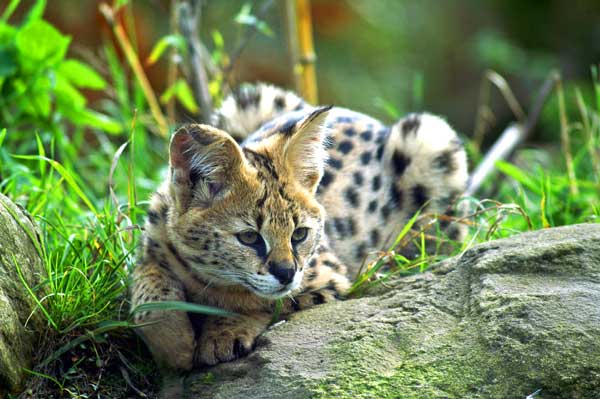 The Bengal hybrid wild cat breed is the most popular and it was used to create another three hybrids that resemble wildcats.

The four wild breeds are the Savannah, Safari, Bengal and Chausie cat. The Bengal was used to create the Toyger, Serengeti and Cheetoh cat breeds.

Try to adopt these cats from a rescue if you can as hybrids are controversial. They can be too wild for a first-time owner. Some issues you may encounter is they may spray to mark their territory (peeing in your house). Also, some may only be able to eat raw meat.

The first 4 cat breeds are a hybrid with a wildcat and 3 are a hybrid breed with the Bengal cat breed. The last cat breed is questionable as to its origin.

The Savannah cat is a hybrid cat breed between a domestic cat and a Serval, an African wildcat. The first filial generation (F1) is too wild to own as a pet. An F2 is the result of breeding an F1 with another Savannah or domestic cat but is also considered too wild.

An F2 offspring would be an F3 and that is the first generation of Savannah that may be possible to own as a pet. Though I believe F4 or F5 is better, especially for first-time owners.

They are known for loyalty towards their owner and are calm and curious. Only moderate maintenance and grooming is typical as they do not shed a lot.

They are a cat, dog, and child-friendly breed but it is best if they are raised with other pets from a young age. It’s important to socialize them similar to puppy socialization.

Even though they are very playful and love interacting with people and other cats they can be destructive. So it’s not a good idea to leave them alone for long.

A fascinating trait is that they can be walked on a leash and taught to fetch. They enjoy playing in the water and being given a bath. That is a wildcat trait because most domestic cats, if not all, avoid the getting wet with a passion.

The life span of the Savannah is 17-20 years. Most often the fur of a Savannah cat will be spotted like the Serval wildcat, but other patterns may be seen. Besides the coat, they also have distinctive ears and long legs (they can jump up to 8 feet).

The Savannah is the largest of domestic cats, standing about 17” tall and weighing from 15-25 pounds.

F1 & F2 are the largest and tend to have the exotic markings but they are the wildest and not recommended as a pet. and that goes for all the cats on this list

The Safari cat is a hybrid cat breed between the Geoffroy’s cat (a small wildcat from S. America) and a domestic cat. They can have either black, silver or orange coats.

It’s the orange coat cats that resemble leopards. Note, I could not find any free photos of the Safari cat. That’s how rare this cat is, so it’s unlikely you will be able to own one (sorry). Take a look at the Exotic Cat Network and Holidog Times for photos and more information on the Safari cat.

They are very gentle but also very rare due to difficulty breeding them. Expect them to be on the large size weighing about 25 pounds.

Their health is generally good and they have only moderate grooming needs. The Safari cat price ranges from $4,000 to $8,000 with a lifespan of 17-20 years.

The Bengal cat is a hybrid cross between a domestic cat and a wild Asian Leopard cat. They are the most common and popular hybrid most likely because they look like leopards, have lots of energy and are very social

Their lifespan is 12-16 years. Grooming needs are moderate as is their shedding. The main problem is they have lots of health issues so expect frequent visits to the vet.

Bengals are considered good with older child and dogs and are very energetic. And like the Savannah cat, Bengals can be taught to fetch and enjoy the water.

Try to adopt a Bengal cat from a rescue and not a breeder if you can. There is no shortage of Bengal cat rescues.

The Chausie cat is a hybrid cat breed of a wild Asian Jungle cat and a domestic cat and may have been a hybrid in Ancient Egypt.

They are medium to large cats that are up to 3 feet long and average 10-15 pounds. Their coats are black or brown with yellow or gold colored eyes being preferred for breed competitions.

F4 and F5 Chausie cats are considered domestic cats and are not considered wildcat breeds. These cats cannot eat gluten so feed them only wet food or raw meat.

They are fearless but not aggressive, very social but not good being alone. Shedding and grooming needs are moderate, they are generally healthy, and are good with children and cat-friendly dogs.

So technically, the Toyger cat is not a hybrid with a wildcat except that which comes from the Bengal. The same is true for the 3 cat breeds listed below.

Female Toyger cats weigh between 7 and 10 pounds and the males are 10-15 pounds. They have a lifespan of 12-15 years and were bred to resemble tigers.

The positives are that they are good with children and cat-friendly dogs. A negative with the Toyger is that they shed constantly so you will have to groom them and have a vacuum ready to go.

The biggest issue though is that they have a number of health issues. Have extra savings for vet visits and medicine.

The Serengeti cat is a hybrid cat breed of an oriental shorthair and a Bengal. They were bred to look like the African Serval, which obviously comes from the Bengal cat. Their eyes are commonly yellow-orange or gold.

They weigh 8-15 pounds and have a lifespan of about 10 years. The Serengeti gets along well with children, dogs, and other cats.

Expect the Serengeti cat to jump very high given their long legs. The height they can jump is given as 7 feet, which means they could jump over a standing person. That will surprise your house guests.

The price for a Serengeti cat ranges from $600 to $2,000. The best sites that I’ve found on this cat breed are Pets4Homes and PetGuide, so take a look at them for more information and photos.

The Cheetoh cat is a hybrid cat breed between a Bengal and an Ocicat. The Ocicat is a hybrid between Siamese and Abyssinian cats. Latter the American Shorthair cat was added to the mix of the Ocicat.

They are typically heavily patterned, muscular, and highly athletic cats. Besides having the leopard-like spots, they are known for a chiseled head ()whatever that means) and very prominent ears.

Their lifespan is 12-14 years and they weigh 8-15 pounds. They are good with children, dogs, are low maintenance and healthy. Try to have a pet friend for these cats because they do not do well being alone.

The Pixie Bob may be a hybrid cross between a domestic cat and an American Bobcat, but it seems that they were bred to resemble a bobcat. Official sources list them as a domestic cat and not a wildcat hybrid, though they do have the look of a wildcat.

Females can weigh from 8-12 pounds and the males from 12-17 pounds. Pixiebobs live from 13 to 16 years. Their health is good and they are child and dog-friendly. But keep in minds that they constantly shed so regular grooming and use of a vacuum is recommended.

The price for a Pixie Bob is more affordable at $600-$800. Check out the SprucePets for more information and photos of the Pixie Bob.

Some of the cats on this list are hybrid wild cat breeds and some are not so wild. I would suggest trying to find a cat rescue to adopt rather than buying one from a breeder.

Or try buying one then adopting a second one so that they have a playmate. Whichever route you choose, may your wild hybrid cat bring you years of joy? Check out Petfinder to find a cat to adopt in your area. Also, take a look at my article for pet rescues and adoption centers in Philadelphia, PA.

How To Introduce A Dog To A Cat

Putting A Cat To Sleep: How I Dealt With It